Known as the “Eagles of Carthage”, the Tunisian national team has always been a bit of a wildcard. Though they were the first African team to record a victory at the World Cup (a feat they achieved in 1978), they’re yet to advance from the group stage in this competition. Their continental record is more impressive, featuring one AFCON title (2004). They play in traditional red and white kits. 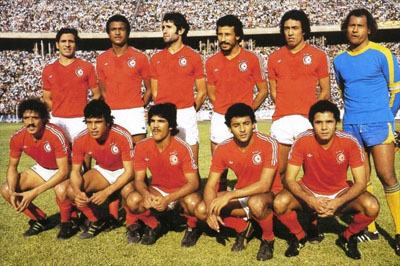 The team lined up in the national team's first World Cup.

Prior to regaining its independence from France, Tunisia formed an unofficial team in 1928. This squad suffered heavy losses in its first three games (all against France’s B team), but managed to record its first victory in 1939. By 1956, the country was officially independent, leading to the formation of the Tunisian Football Federation. The next year, Tunisia played its first match as a new nation, narrowly losing to Algeria 1-2 in a match played during the Algerian War.

In 1962, Tunisia reached the final phase of the AFCON for the first time in its history. After losing to Ethiopia in the semi-finals, they defeated Uganda to claim third place. Three years later, they went one step further by finishing as runners-up on home soil. Following a 4-0 revenge against Ethiopia, a goalless draw against Senegal was enough to make the finals. In an exciting showdown, Tunisia ended up losing to Ghana 2-3 in extra time.

History in the making

Despite these early signs of excellence, Tunisia went on to miss all major tournaments in the next 13 years. They finally returned to the spotlight in 1978, when a talented generation led by Tarak Dhiab placed fourth at the AFCON. Later that year, Tunisia became the first African side to win a World Cup match after defeating Mexico 3-1. However, a 0-0 draw with defending champions West Germany and a 0-1 loss to Poland knocked them out of the tournament.

This appearance was followed by another disheartening drought, which saw Tunisia go through a long line of coaches with no results. From 1980 to 1992, the team made only one major tournament: the 1982 AFCON, where they were eliminated in the first round. The only other bright spot in this period was qualifying for the 1988 Summer Olympics, where they also failed to qualify for the knockout round.

In 1994, the hiring of Henryk Kasperczak as a coach led to another resurgence of Tunisian football. From that point onward, the Eagles qualified for 14 consecutive AFCON tournaments, making the knockout phase on 10 occasions. In 2004, they won their first title on home soil by going through the tournament undefeated. In the elimination phase, they struggled with Senegal and Nigeria before ultimately prevailing 2-1 over Morocco in the finals.

Their World Cup record also improved, as they qualified for three consecutive tournaments from 1998 to 2006. However, they didn’t manage to record a single victory in any of their nine games, finishing each tournament with one draw and two defeats. The 2006 World Cup was particularly disappointing, as the team impressed during the pre-tournament friendlies. Still, a 2-2 draw with Saudi Arabia in the opener paved the way to two quick losses to Spain and Ukraine.

Tunisia then missed out on the next two World Cups before coming back in 2018. This time around, the quality of their opponents didn’t give them much reason for hope. Still, the Eagles provided a solid showing against England, losing the game in extra time. They were then trumped by Belgium 2-5 before finally recording its first World Cup victory by overcoming a first-half deficit and defeating Panama 2-1.

The eagle associated with the club and the red and white color of the kit is seen in the circular logo. The letters "Fédération Tunisienne de Football" (in English: Tunisian Football Federation) is written in the lower part with the initials in bold.