The Black Stars of Ghana have long been a mainstay in African football, but they haven’t made an impact at the international stage until fairly recently. In their World Cup appearances (2006, 2010, 2014, 2022), they have as best reached the quarter-finals. They also claimed several Africa Cup of Nations titles and placed third at the 1992 Olympics. In 2008, they reached the 14th place in the FIFA rankings. 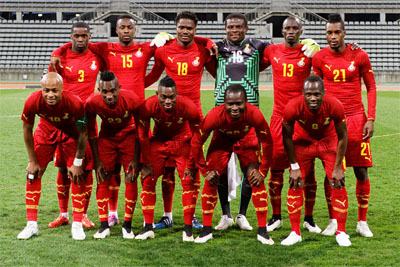 The team lined up before an exhibition match in 2015.

Rise of the Black Stars

The Ghana Football Association (GFA) was founded in 1957, the same year Ghana gained independence from Britain. The following year, the GFA was admitted into FIFA and CAF. The national team immediately adopted the moniker “Black Stars,” paying tribute to Marcus Garvey’s Pan-Africanism movement. Around this time, the Black Stars played a well-publicized friendly match with Spanish champions Real Madrid, drawing 3-3.

At their first AFCON in 1963, Ghana claimed the title on home turf by defeating Sudan 3-0 in the finals. They repeated as champions in 1965 in dominant fashion, winning all three of their games with an overall goal difference of 12:5. The next two tournaments were slightly less successful, as they finished runners-up to Congo-Kinshasa and Sudan. Both final matches were close affairs, with Ghana losing 0-1 on each occasion.

After failing to qualify for the following three AFCONs, the Black Stars returned as hosts in 1978. Once again, they won the whole thing, with Opoku Afriyie scoring a brace in the final against Uganda. In 1982, they unexpectedly won their fourth title after laboring through most of the tournament. In their semi-final match against Algeria, they needed a late-game equalizer to win the match in overtime. In the finals, they beat Libya in a penalty shootout.

The following two decades saw Ghana put in inconsistent performances. As the competition at AFCON got stronger over time, they began struggling to make it past the quarter-finals. The association was also faced with various disciplinary issues in the team, including a fiery scuffle between Anthony Yeboah and Abedi Pele in the late ‘90s. Ultimately, Ghana had to wait for a new generation of talent to take the next step.

This generation arrived in the early ‘00s. Led by players such as Michael Essien, Sulley Muntari, and Asamoah Gyan, the Black Stars qualified for their first World Cup in 2006. They impressed in their first showing, defeating the Czech Republic and the United States to make it to the knockout stage. In the round of 16, however, they bowed out to reigning champions Brazil, losing the match 0-3.

The team returned for the 2010 World Cup, grabbing second place in a tough group containing Germany, Serbia, and Australia. In the round of 16, they outlasted the United States in overtime, with Gyan scoring the winner. Their run came to an end in a controversial match against Uruguay. In a crucial moment, Luis Suárez blocked a shot with his hand and was thrown out, but Ghana missed the resulting penalty and was later eliminated in a penalty shootout.

Four years later, Ghana participated in their third World Cup. However, poor organization and crumbling inter-team relations led to a disappointing tournament. They went on to lose to the United States and Portugal, though they did manage a 2-2 draw with eventual champions Germany. This performance was one of the many reasons behind the dissolution of the GFA in 2018, along with rampant corruption. The GFA was reinstated in 2019.

The logo consists of a football in the center and a decorative flag, corresponding with the national flag of Ghana with a triband of red, gold and green plus a five-pointed star.