For most of its history, the Senegal national team struggled to escape the shadow of its West African rivals, such as Ghana and Nigeria. Since the turn of the century, however, they’ve been one of the most consistent sides on the continent. They have reached the quarter-finals in World Cup. In the Africa Cup of Nations, they finished as runners-up twice and claimed three more top 4 finishes before winning their first title in 2021. Their nickname is the Lions of Teranga. 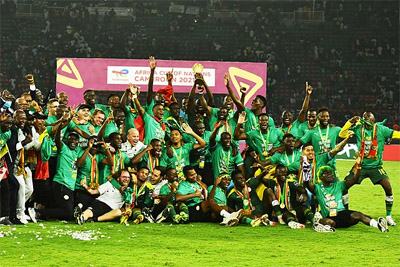 Celebrating after winning Africa Cup of Nations in 2021.

The Senegalese Football Federation was founded in 1960, a few months after Senegal gained its independence from France. In its first official match against Dahomey, the Lions lost 2-3. By 1963, Senegal was an approved member of both FIFA and CAF. In their first AFCON appearance, they finished second in their group and lost 0-1 to Ivory Coast in the third-place match. Three years later, they failed to advance from the group stage.

During the following two decades, Senegal qualified for just one major tournament. The ‘90s were a bit more hospitable, as the team finished in fourth place at the 1990 AFCON. After making it out of their group with one victory and two draws, they lost to Algeria in the semi-finals and Zambia in the third-place match. At the following two tournaments, they made it to the quarter-finals before getting knocked out by Cameroon and Zambia, respectively.

Turn of the century

Since 2000, Senegal established itself as a new power in West Africa. From 2000 to 2006, they made it to the quarter-finals at each of the four Africa Cup of Nations tournaments they played in. Their best finish to date was the second place at the 2002 AFCON, where they topped their group and beat DR Congo and Nigeria on their way to the finals. They went on to lose to Cameroon in a tense penalty shootout.

Later that year, Senegal made its World Cup debut. They proved to be one of the biggest sensations of the tournament, as they defeated France and drew with Denmark and Uruguay to grab second place in their group. In the round of 16, they became the second African team to reach the quarter-finals by beating Sweden 2-1 in extra-time. Their run was ended in the quarter-finals, as Senegal was unable to score against a strong Turkish defense.

Following this promising appearance, Senegal continued to be competitive at AFCON tournaments. However, they were unable to advance from the group stage until 2017, when they reached the quarter-finals. With Cameroon as their opponent, history repeated itself, and Senegal ended up losing in a penalty shootout again.

In 2018, a squad led by Sadio Mane made it to the World Cup. Expectations were high for the Lions, especially once they managed to defeat Poland in their opener. This was followed by a 2-2 draw with Japan and a minimal loss to Colombia, which left Senegal and Japan even at 4 points and with identical goal difference. This led to the first use of the “fair play” rule at the World Cup, as Japan advanced due to receiving fewer yellow cards.

Under manager Aliou Cissé, Senegal made a strong run at the 2019 AFCON. They defeated each opponent they came across throughout the tournament, with one exception: Algeria. In both their group match and the eventual final, Senegal lost to Algeria 0-1. The final match was a particularly tough pill to swallow, as Algeria came into the lead in the 2nd minute and never looked back. Though Senegal dominated the match, the equalizer never came.

The logo matches the color of the country's flag and in the center there is a lion, matching the nickname Lions of Teranga. In a circle “Sénégalaise de Football Fédération” (in English: Senegalese Football Federation) is written.