Association football arrived in Croatia in 1873. According to historians, this was the sport of choice of English expatriates who worked on industrial projects in various parts of the country. After a few local clubs have been established in 1907, forming a national team seemed like a logical next step. This came to pass in 1918, but the newly formed Croatian side played just a few matches before joining the Yugoslavian national team. 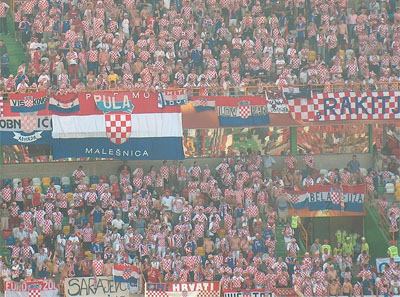 Association football arrived in Croatia in 1873. According to historians, this was the sport of choice of English expatriates who worked on industrial projects in various parts of the country. After a few local clubs have been established in 1907, forming a national team seemed like a logical next step. This came to pass in 1918, but the newly formed Croatian side played just a few matches before joining the Yugoslavian national team.

Following a collapse of the Kingdom of Yugoslavia in WWII, Croatia went back to being an independent country in 1941. This Croatian squad played 15 friendly matches by the end of the war, at which point they again joined the Yugoslavia national team. From that point onward, the vast majority of Croatian players represented the Socialist Federal Republic of Yugoslavia until the early ‘90s and the Yugoslav Wars.

Despite Croatia declaring its independence in 1991, an unofficial Croatian team was formed the previous year. This squad played three friendly matches against the United States, Romania, and Slovenia, winning all three. This was also the first time that Croatia played in its signature red-and-white chequered kits. In 1992, the country was readmitted to FIFA and played its first set of official matches against Australia.

Croatia gained admission into UEFA in 1993, missing the 1994 World Cup qualifiers. They made their international debut in the Euro 1996 qualifying campaign, entering the FIFA World Rankings in 125th place. During these qualifiers, Croatia recorded its first official victory (Estonia, 2-0) and first defeat (Ukraine, 0-1). After finishing first in their group, they moved up to 62nd place in the rankings and secured their place at the European Championship.

Led by celebrated manager Miroslav “Ćiro” Blažević, Croatia was set to be one of the dark horses at the Euro 1996. They started off well, winning their first two games against Turkey and Denmark, but had to settle for second place in their group after losing to Portugal. This loss pitted them against Germany in the quarter-finals, where they lost a heavily contested match 1-2. Germany went on to win the tournament.

With Blažević as manager, Croatia had little trouble qualifying for the 1998 World Cup. Their group contained Argentina and two other first-time World Cup participants, Japan and Jamaica. Once again, they won their first two matches and lost the third, taking second place in the group. In the round of 16, they beat Romania 1-0 on a penalty goal from Davor Šuker in the final moments of the first half.

In the quarter-finals against Germany, Croatia put in its best performance of the tournament, winning the game 3-0. Their run came to an end in the semi-finals, as they lost 0-2 against France. Both goals were scored by Lilian Thuram, and those ended up being his only goals in the national team in 142 games. Croatia went on to beat the Netherlands for a third-place finish in their World Cup debut. With 6 goals, Šuker was the tournament’s top scorer.

Following these promising performances, Croatia seemed to be well set for further success. However, their Euro 2000 qualifying campaign was quite spotty, causing them to miss their first major tournament as an independent nation. The World Cup 2002 qualifiers started off on a bad note as well, but new manager Mirko Jozić steered the ship on the right course. At the tournament proper, though, they failed to advance from the group stage.

With most of the 1998 World Cup squad retiring from the national team, Croatia suddenly seemed unable to make that extra step. At the Euro 2004, they placed third in a tough group containing France, England, and Switzerland. The 2006 World Cup was a similar story, as they finished third in the group behind Brazil and Australia.

The country’s brightest outing during this period arrived at the Euro 2008. Led by new manager Slaven Bilić and a new generation of young players such as Luka Modrić, Croatia breezed through its qualifying group. However, an injury to their first-choice striker Eduardo just before the tournament was a huge blow for the team. After advancing from their group, they lost their quarter-finals match against Turkey on penalties.

This disappointing loss was followed by missing another World Cup in 2010. The Euro 2012 seemed to be a chance at redemption, especially once Croatia got its revenge on Turkey by knocking them out during the qualifiers. However, a group containing Italy and Spain proved to be too tough a task to overcome. This was Bilić’s last game in charge, but most Croatian dailies credited him for bringing the national team back into the spotlight.

The following period was decidedly mixed, in terms of both results and performances. After qualifying for the 2014 World Cup, Croatia lost the tournament opener against hosts Brazil in a match marked for numerous controversial referee decisions. They eventually placed third in the group, behind Brazil and Mexico. The Euro 2016 was a step forward, but the team still lost to eventual champions Portugal in the round of 16 on a late goal from Quaresma.

Croatia struggled during the 2018 World Cup qualifiers, as evidenced by consecutive losses against Iceland and Turkey. Still, they managed to make it to the playoff round against Greece, which they handily won 4-1. As the tournament was getting closer, various pundits started to compare this team to the 1998 World Cup squad in a positive light. Croatia proved that the comparison had legs by finishing first in their group.

The knockout stage was a series of thrillers, with Croatia winning both of its first two matches against Denmark and Russia on penalties. The semi-finals match against England didn’t quite get that far, as they won the game in extra time on a late winner from Mario Mandžukić. Croatia lost the final match to France 2-4, but that didn’t stop Modrić from being voted player of the tournament. 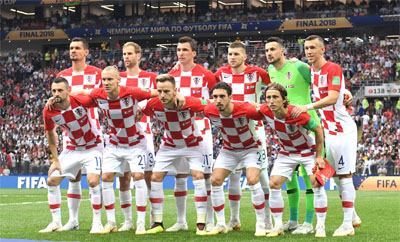 Croatia has participated five times in the World Cup (FIFA World Cup qualification not included), with tournaments as a non-independent country excluded.

Croatia have participated six times in the European Championship (Euro) (tournaments as a non-independent country excluded).

* Participated as a part of Yugoslavia.

The badge of the Croatia football national team includes three main parts. At the bottom is an old-fashioned ball, in the middle golden letters initials on blue background, and the checkered white and red at the sides. The initials “HNS” stands for Hrvatska nogometna reprezentacija, Croatian for Croatia national football team.