Despite having to wait until 1986 to qualify for their first World Cup, the Denmark national team has enjoyed a lot of success on the football field. They have three top 4 finishes at the European Championship, including a surprise victory in 1992. They also claimed two Olympic silver medals and reached the top 16 in the World Cup on three occasions. Other than its competitive nature, the team is known for its traditional red-and-white kits. 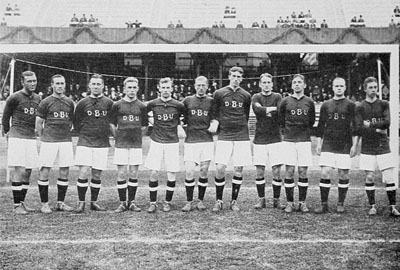 The team of Denmark in the 1912 Olympics.

Early on in its history, the Danes made a name for itself at the Olympics. In 1906, a team comprised of players from the Copenhagen Football Association defeated one Greek team and two clubs from the Ottoman Empire to claim the unofficial gold medal. Two years later, they placed second at the first official football tournament at the Olympics. They won another silver medal in 1912, which led to them being ranked the best team in the world by the ELO ranking.

Though these early results were encouraging, the Danish Football Federation (DBU) didn’t have much interest in international football. From 1920 to 1948, they settled for playing friendly matches and participating in the regional Nordic Championship. Even after this period, football in Denmark remained mostly an amateur pastime, which led to many of the best Danish footballers leaving the country and seeking their fortune elsewhere. A step that at the time resulted in banishment from the national team.

In 1964, Denmark took advantage of the easy draw to qualify for the European Championship, where they finished fourth after losing to the Soviet Union and Hungary. However, this result played a key role in the DBU finally deciding to allow professional players in the national team. Soon enough, professional football was introduced in the Danish leagues as well, which paved the way for a more competitive national team.

By 1980, Denmark had a team that could enter the trophy race. After narrowly missing out on the 1982 World Cup, they qualified for the Euro 1984 by defeating England at Wembley in the deciding match. At the tournament proper, the team -- now known as “Danish Dynamite” -- advanced from its group but lost to Spain in the semi-finals. The match was decided by a penalty shootout, with Preben Elkjær the only player to fail to convert his kick.

Two years later, Denmark finally made its first World Cup appearance and their following performance in 1986 World Cup is still what many football fans associate most with the Danish national team. With the attacking duo of Elkjær and Michael Laudrup, Denmark swept the group consisting of West Germany, Uruguay, and Scotland. With three victories -- including a 6:1 thrashing of Uruguay -- hopes were high for a deep run. However, they were in turn thrashed by Spain in the round of 16, with Emilio Butragueño scoring four goals in a 5:1 rout.

Following its inaugural World Cup showing, Denmark participated at the Euro 1988. However, they recorded three defeats in a “group of death” containing Spain, Italy, and West Germany. This disappointing appearance -- along with failing to qualify to the 1990 World Cup -- led to a coaching change, with Richard Møller Nielsen taking over as new manager. Nielsen’s first task was to qualify for the 1992 Euro, which was to be held in Sweden.

At first, Nielsen didn’t have much success. After a comfortable victory against the Faroe Islands, Denmark drew against Northern Ireland and lost to Yugoslavia. Though this poor start led to the Laudrup brothers retiring from the national team, Denmark managed to win out the rest of their matches to place behind Yugoslavia. With Yugoslavia getting excluded from the competition due to the war sanctions, Denmark managed to book a last-minute trip to the tournament.

At the tournament proper, Denmark relied on the legendary goalkeeper Peter Schmeichel and the returning Brian Laudrup. Thanks to Nielsen’s trademark brand of defensive football, they advanced from their group and defeated the Netherlands in a penalty shootout in the semi-finals. In the final match, they shocked the football world by prevailing over heavy favorites Germany, with John Jensen and Kim Wilfort scoring in a 2-0 victory.

With their first major international title in tow, Denmark entered a period of decline. At the Euro 1996, their hopes of defending the trophy were dashed by the end of the group stage. Though they managed to defeat Turkey in the final round, a draw against Portugal and a 0-3 drubbing from Croatia led to an early elimination. At the next Euro appearance in 2000, they were the worst team of the tournament with three defeats and a goal difference of 0:8.

In between these disappointing outings, Denmark had a solid showing at the 1998 World Cup. With both Laudrup brothers in their final international campaign, Denmark managed to advance from its group despite some mediocre performances. However, the round of 16 match saw them play their best match at the tournament, dismantling Nigeria 4-1. In the quarter-finals, they lost 2-3 to eventual finalists Brazil in a closely contested and entertaining match.

Due to these relatively disappointing results, Denmark turned a new leaf by appointing former captain Morten Olsen as manager. His squad was immediately dubbed “the Olsen Gang,” after a popular series of Danish movies based around the criminal genius Egon Olsen. This period brought big changes to the team’s tactics, as Olsen preferred an attacking 4-3-3 formation. To support his vision, all national youth teams switched to the 4-3-3 as well.

In the following two tournaments (the 2002 World Cup and Euro 2004), Denmark put up mixed performances. On both occasions, they played very well in the group stage -- even defeating reigning champions France in 2002 -- but failed to advance any further. At the World Cup, they were defeated 0-3 by England in the round of 16. At the Euro 2004, the same result saw them eliminated in the quarter-finals by the Czech Republic.

With two failed qualifying campaigns that followed, the trust in Olsen started to wear thin. However, the DBU decided to keep him as coach and were rewarded for this decision when the team qualified for the 2010 World Cup from a tough group containing Portugal and Sweden. At the tournament, a host of injuries made their job much harder. Despite a hard-fought 2-1 victory against Cameroon, they were unable to make it out of their group.

At the Euro 2012, Denmark was drawn into another “group of death,” along with Germany, Portugal, and the Netherlands. They went on to defeat the Netherlands 1-0 in their opener, but a heartbreaking 2-3 loss to Portugal meant that they would need to beat Germany to advance to the knockout round. Though they held firm for most of the match, they eventually succumbed to Germany’s potent offense, losing the match 1-2.

By this time, Denmark pinned all of its hopes on Christian Eriksen, who had become one of the best midfielders in the world. The next major tournament they qualified for was the 2018 World Cup, where one victory and two draws were enough to make it to the knockout stages. In the round of 16, they held eventual finalists Croatia to a draw for 120 minutes but ended up losing the game in a penalty shootout. Even better was the performance in Euro 2020. The Danes were eliminated in the semi-finals against England in extra time.

Denmark have participated nine times in the European Championship (Euro).

The logo consists of a circle against a red background with white text. The initials "DBU" in the center, which are written out in the outer region as "Danske Boldspil Union" (in English: Danish Ballgames Union). In the bottom part, the year of establishment can be seen.