In 1927, an effort was made by the Fascist regime to unite all Roman clubs under the same banner, with Lazio being the only holdout. The merging of the other Roman clubs led to the foundation of AS Roma, and marked the beginning of a fierce inter-city rivalry. 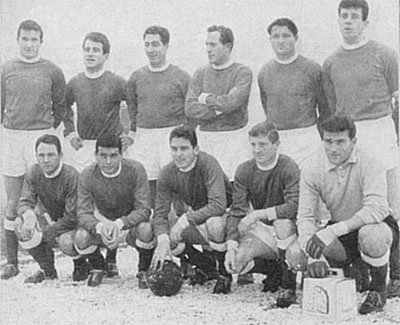 When SS Lazio was founded on 9th January 1900, its original founders settled on the team colors of white and sky blue in order to pay homage to Greece, the homeland of the Olympics. Whereas canoeing, swimming and running was the sports in focus, football become a new branch in the second year of the multi-sporting club’s existence.

Before attending the national league system, Lazio won the Campionato Romano (Rome Championship) in 1907. Between 1910-1912, Lazio had much success in the Terza Categoria, at that time divided by several regions. Lazio played against Rome-based teams such as SGS Fortitudo, SS Juventus and Roman.

Lazio could have won their first national championship in 1915; they were in the lead in Prima Categoria when the season was abrupted due to the war. The good results continued after the war until the Serie A was initiated. After some decades that didn't yield much success for SS Lazio, their first trophy came in 1958 (Coppa Italia). Yet, it didn't stop the club getting relegated to the second division only three years later. After a string of mediocre finishes in both Serie A and Serie B, Lazio managed to form a solid team led by Giuseppe Wilson and win their first Scudetto in 1974.

In 1980, Lazio was relegated to the second division as punishment for their part in the Totonero scandal ("totonero" is an Italian term for illegal betting on football matches). Along with many other clubs, Lazio and Milan was the hardest punished in this match-fixing scandal.

Another blow came six years later due to a second betting scandal, the so-called Totenero 1986. The club was one of many facing point deduction and as a result almost was degraded to the third division.

The club remained on the margins until the arrival of Sergio Cragnotti in 1992. The new owner turned a new leaf and started investing into famous players like Juan Sebastian Veron, Christian Vieri and Hernán Crespo, whose $52 million signing broke the world transfer record.

Of importance was also the appointment of Sven Goran Eriksson as new coach in the 1997-1998 season. His team won Coppa Italia that same season and did almost claimed a UEFA Cup trophy, but was dismissed in the final by a clearly stronger Inter.

This shopping spree of Cragnotti led to a streak of respectable finishes in Serie A, and the club finally managed to win its second Scudetto in 2000. The turn of the century proved to be a very successful period for the Biancocelesti, as they also won three Coppa Italia trophies (1998, 2000, 2004) and the final Cup Winners' Cup in 1999. 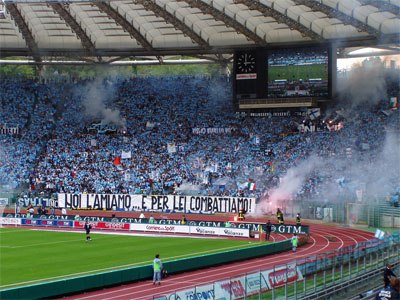 Lazio supporters at the Stadio Olimpico in 2007.

After some failed big money signings and Cragnotti's forced departure in 2002, Lazio was forced to sell their star players in order to avoid bankruptcy. This was followed by a return to mediocrity, but the club did occasionally manage to rise above the expectations by winning two more Coppa Italia titles in 2009 and 2013.

The badge of Lazio is characterized by the yellow eagle which refers to power and strength, especially associated to great ancient gods like the Greek Zeus and Roman Jupiter. The golden eagle would later be adopted as a symbol by the Italian Fascists, but as Lazio had used the symbol many years earlier where is no connection.