Home › Formations and systems in football

Formations and systems in football

The core of football tactics is the formation of the team. In football (soccer) the formations are classified in names consisting of numbers that represent defenders, midfielders and attackers (the goalkeeper is unnecessary to involve in this tactical aspect). Here is a historical overview of the most utilized formations in football.

Formations are simplified ways to describe a team’s positional tactic schematically. As Jonathan Wilson writes in Inverting the Pyramid: "designations of formations can at times seem a little arbitrary. Just how far behind the main striker does the second striker have to play for 4–4–2 to become 4–4–1–1? And how advanced do the wide midfielders have to be for that to become a 4–2–3–1?"

You probably never guess the existence of this formation in serious circumstances. It was a while ago, though, more exactly in the 19th century in the pre-modern era of football.

To use only one defense player and one midfielder and put the rest on attack seems crazy today, but the matches looked different at the current time with minimal passing in sideways and instead full attack with much dribbling going on.

The reason for all that dribbling was not just because football in these days lacked sophistication, but more due to the fact that the offside rule was completely different from what it is today. Until 1925, the rules prescribed that a player was not allowed to be ahead of the ball (in some respects more similar to ice hockey than modern football), and as a result had to dribble it forwards.

Another early formation connected with the dribbling game was 2-1-7, among other teams associated with Old Etonians.

With the popularity of the set-up, a standardization followed with numbers linked to the position on the field: 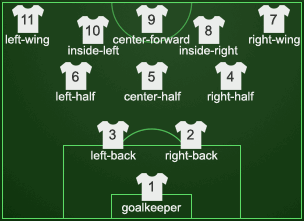 The introduction of the offside rule in 1925 started a development of other formation more adapted to the offside.

One of the first side steps from the well-established 2-3-5 was the "W-M" (the attacking cluster is W-formated and the defending cluster is M-formated), or 3-2-2-3. The innovator was the great football theoretician Graham Chapman during his time as manager for Arsenal in the early 1930s. 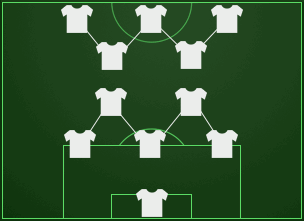 It was a formation used by many teams in 1950 World Cup, although not by the winning team Uruguay.

After the change of the offside rule in 1925, both attacking and defending strategies would transform and new playing systems as a result emerged. The altered offside rule would benefit the attacking side so a third defender was more often taken into consideration (another formation used at this period was 3-4-4), but it was obviously still an emphasis on attack.

Ahead of the three defenders and two midfielders there was a five-man offense. The offense was organized with one center forward flanked by double wings on both sides. Among the most successful team with this formation was Arsenal.

Instead of the usual defender-midfielder-forward configuration, the so-called Metodo system brought a formation with four units into practice. This formation was used by Italy and helped the team to win the 1934 and 1938 World Cups.

This formation was a product from Brazil. It was first tested in the Brazilian league and later in the 1958 World Cup which Brazil won. It should be mentioned that the 4-2-4 was not a Brazilian novelty, but the Brazilians had most success with it – they would use it again in the 1970 World Cup with supreme result. One of the features of 2-4-2 and of the Brazil national team was the attacking full-backs.

This modern way of organizing the team was executed by England in the 1966 World Cup as an alternative to their 4-1-3-2. It was the first formation ever without wing forwards. 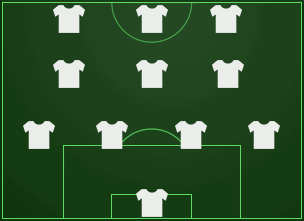 This formation with five defending players was developed by the famous Inter coach Helenio Herrera. The 5-4-1 system was focused on defense, but also allowed counterattacks.

Both Italian clubs and the Italian national team had success with 5-4-1, including the World Cup silver medal won in 1970.

The 4-4-2 formation was a development of the 4-3-3 utilized by Swedish clubs like IFK Gothenburg and Malmo FF which led to some international successes for these teams. The inventing is otherwise attributed to the Soviet Russian coach Viktor Maslov. 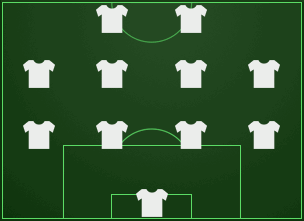 The playing system included factors of collective strategy and with players working over a big part of the field. Many teams around the world use the 4-4-2 formation today and it is especially preferred in British top football.

In contrast to the 4-4-2 formation, 3-5-2 would put more emphasis on individual skills. West Germany won the World Cup in 1990 practicing this formation and it is often used in football of today. It is uncertain when it was first used, some say it materialized when Miroslav Blažević coached Dinamo Zagreb in the middle 1950s. 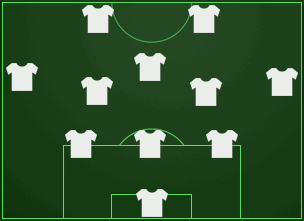 The positions of the players could be arranged in some different ways, one alternative is with an offensive midfielder behind the forwards as the picture above suggests.

The 4-2-3-1 formation is a modification of the 4-4-2 and was first used widely in top-level football in the 2010 World Cup. In front of the four defenders and behind the lonely forward, there are two defensive and three offensive midfielders.

This formation is used by tons of clubs in elite football and is for example the most used system in the Spanish La Liga.

No tactic formation is the "best"

No formation is optimal in all situations. What is best depends on different circumstances. The formation should for example be based on the opponent and the players the manager has to his disposal.

› Abbreviations in football
› The football field and its dimensions
› Free kicks