The history of FC Internazionale Milano is a turbulent one, with many highs and some lows along the way. The club was founded in 1908, following a breakaway from its parent club AC Milan. It is commonly believed that the dispute was about Milan focusing exclusively on Italian players. As per the wishes of its founders, the new club was named Internazionale, thus signaling it was open to players of all nationalities. 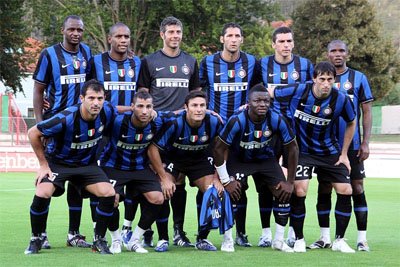 The about to be Italian football dynasty, Inter Milan, was established on 9 March 1908. It didn't take long for the club to start walking the road to greatness, as the first Scudetto came only two years after the foundation. Inter would cement its role in Italian football by winning six more in the next 50 years. Their first Coppa Italia trophy was won in 1938, on the back of Giuseppe Meazza's inspirational displays. Meazza is still Inter's leading goalscorer of all time with 284 goals, and the club's stadium would later be officially named in his honor.

But everything was not a fairy tale. After the National Fascist Party government had talking over in 1922, the Milan club had to adapt to political orders. These dictated a merge with another club, Unione Sportiva Milanese, and the new name Società Sportiva Ambrosiana. When the days of fascism in Italy reached an end in 1943, the club could soon change back to their old name.

Under the influence of Herrera

For its greatest successes, Inter has to thank the Argentine coach Helenio Herrera. As soon as he arrived at the club in 1960, he started modifying the catenaccio system in order to make it more suited for counterattacks. An important aspect of the catenaccio system was the libero, a role that was given to Armando Picchi. Herrera also set strict guidelines regarding nutrition and other areas concerning discipline. During Herrera's tenure at the club (1960-1968), Inter won two European Cups and three Scudettos, conceding less than a single goal per game throughout. They would never repeat that kind of dominance, and this golden period is now famously known as the "Grande Inter" era.

Herrera had a great team including the skillful attacker Sandro Mazzola, the fast right-winger Jair da Costa and the playmaker Luis Suárez, who became the most expensive player in the world when he moved from Barcelona to Inter in 1961.

In the next twenty years, Inter managed to add two Scudettos and two Italian Cups to its tally. Then came the roaring 90s, and Inter suddenly found themselves on the margins, playing second fiddle to its old rivals, Milan and Juventus. The club was dangerously close to being relegated in 1994, but managed to survive and remain the only Italian club to never drop from the top division.

This Dark Age came to an end with the appointment of Roberto Mancini as head coach in 2004, who led them to three consecutive Scudettos (including the fantastic record in the 2006–07 season with 30 won games out of 38, collection 97 points in total), before departing in 2008. In 2010, Inter became the first Italian team to complete a Treble by winning Serie A, Italian Cup and the Champions League.

The current FC Internazionale logo is almost similar to the black and white logo that was created by Giorgio Muggiani in 1908. A new version which added blue and gold colors was adopted in 2007. Between 1928 and 2007 different logos was used among some which was quite similar to the current.

Note. The 14th championship title was earned after Juventus was disqualified.