Wolverhampton Wanderers FC has won the top British league three times: 1954, 1958 and 1959. They have also won the FA Cup four times and the Football League Cup two times. They reach the UEFA Cup final in 1972. Two of the most prominent players are Billy Wright and Bill Slater. 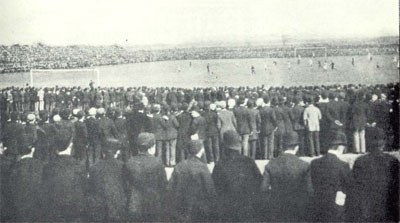 Wolverhampton vs. Everton in the 1893 FA Cup final.

The club, not to be confused by the at that time already existing Wanderers FC, was founded in 1877 and it was one of the original included teams when Football League was founded in 1888. The same season year would the team reach the final in the FA Cup, which ended with a loss against Preston North End. Wolverhampton would once again reach the final in the same tournament four years later and could that time celebrate a victory.

The strongest period was probably in the late 1950s and 1960 when the club won the league twice (1958 and 1959) and also the FA Cup in 1960. It should be added that the former dominant, Manchester United, was weakened because of the Munich plane crash in 1958.