Fourth biggest club in Turkey, Trabzonspor cannot compare themselves to Istanbul's “Big Three” in terms of titles won, but their achievements – mostly – in the seventies and – less – eighties have earned them everyone's respect in the country. Plus, some famous wins in UEFA competitions have brought the club international fame, “warning” big European teams that it's not just Galatasaray, Fenerbahçe and Beşiktaş they need to respect, even fear, when they visit Turkey. 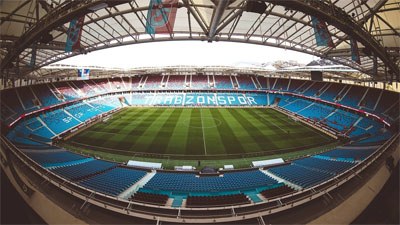 Interestingly, Trabzonspor Kulübü (Club; they are commonly referred to as Trabzonspor FC in English) were founded twice, in a matter of just 14 months. In June 1966, İdmangücü, Karadenizgücü and Martıspor, three clubs that preexisted in Trabzon, came together to form one club, under the name of Trabzonspor.

The merger was though incomplete, since the biggest club of the city, İdmanocağı, had refused to join in. A year later this changed. Trabzonspor, as they had existed for a single season, were dismantled and founded again, in August 1967, this time with all of the city's main clubs on board.

In the top flight

After spending some seasons in Turkey's second category, Trabzonspor finally won the right to compete in the top flight in 1974, and they have never been relegated since.

A decade that started with the club playing in the second category and struggling to have a breakthrough and join the group of the country's top teams, ended up being the best decade in the club's history. The last day of the seventies, Trabzonspor had already won three Championship titles, and were on their way to adding a fourth and fifth one before summer 1981.

In 1976, when they won their first Championship title, they became the first team outside Istanbul to succeed that, with many doubting that they were something more than a firecracker, that lit up the sky for a short while, destined to return to obscurity after that. Following year, Trabzonspor finished the season topping the Championship table again, winning the Turkish Cup as well. That was the best answer to their doubters.

After finishing second in 1978 (but winning the Cup again), Trabzonspor went on to write an even more impressive chapter in their history, by winning the Championship title not once or twice, but three times in a row. Their sixth Championship triumph in 1984 (having finished second in 1982 and 1983), combined with yet another Turkish Cup win, earned them the undisputed title of the most successive team in Turkey from mid seventies to mid eighties, a huge deal in a country whose football scene had been dominated until then (and has been dominated ever since) by Istanbul's three colossal clubs.

After that 1984 title, the closest Trabzonspor ever got to winning the Süper Lig again was in 2011, when, dramatically, they were left second, despite the fact that they finished the season with 82 points, exactly the same as Fenerbahçe had. What decided the title was the fact that Fener had beaten Trabzonspor 2-0 at home, and lost 3-2 in Trabzon. The goal difference favoured them, and won the title, which, interestingly, Trabzonspor claim to have won themselves, including it in the list of Championship trophies someone can see when visiting their official website.

Internationally, Trabzonspor have never managed to progress far enough in a UEFA competition, but some wins (combined occasionally with qualifications) are fondly remembered in Trabzon, and fill locals with pride.

In December 2016, Trabzonspor entered their new stadium, named after former goalkeeper and coach Şenol Güneş (for sponsorship reasons, it's currently called Medical Park Arena). Güneş spent almost his entire career at Trabzonspor, played for the club for 15 years, from 1972 to 1987, and wore their jersey in 532 official games, a record that was broken 15 years later by Hami Mandıralı.

Relatively little-known outside Turkey, Mandıralı played at Trabzonspor from 1984 to 1998, spent a season at Schalke, and then returned to Trabzon for three more years. When he left for good in 2002 (he spent a season at MKE Ankaragücü as well before retiring), he had played in more than 551 Trabzonspor official games, and scored more than 261 goals, a record that seems practically impossible to ever be broken.

What is dominant in Trabzonspor's logo is a big and very curvy “T”, the finishing of which looks like an “S” (Trabzon-Spor). The year the club was founded (1967) is included, just as an old fashioned ball is, right above the “two in one” letter. According to the Turkish Federation's star system, a team can add a star to their logo for every five Championship titles won. Trabzonspor have six, hence the single star on top.