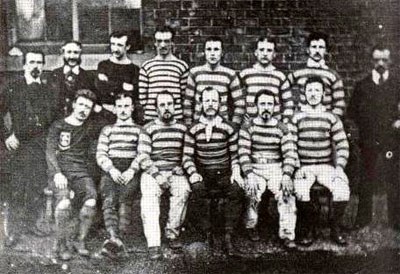 Sheffield Wednesday back in 1878.

The club actually existed earlier as a cricket club – The Wednesday Cricket Club was founded in 1820. The earliest documents tell that the first match between two clubs ever was played in 1857 between Sheffield and Hallam Football Club (Sheffield won with 2-0). Another early football match that is documented is Sheffield against London twice, in 1866 and in 1871. During this time the rules of the game was not set and differences occurred in the north and south. In the first meeting Londond won, but in the second meeting, which was played under Sheffield rules, Sheffield would win.

In 1882, the club was parted in two different sections: cricket and football.

It could also be claimed that Sheffield Wednesday should be separated from Sheffield Club and in this case the establishment should be dated to the year 1867. The club established in that year were originally called The Wednesday until a change of name in 1929.