With a foundation date of 1862, Notts County FC is the oldest professional football club in the world. Despite the early start, however, they haven’t managed to claim a top-flight title; two third places in Division 1 (1891 and 1901). Their greatest success arrived in 1894, when they won their only FA Cup. They’re nicknamed “The Magpies” for their black-and-white kits, which were adopted by Juventus in 1903. 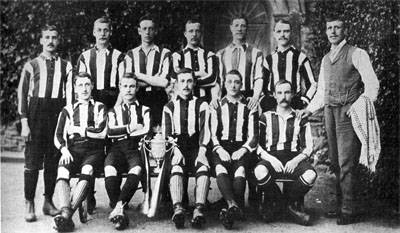 The Notts County team in 1894 with the FA Cup trophy.

Following its foundation in 1862, Notts County initially focused on playing a game that they invented themselves. Once the Football Association was formed, they switched to football. Soon thereafter, their full-back Ernest Greenhalgh participated in the first-ever international match: England vs. Scotland. In 1888, Notts County was one of the 12 founding members of the Football League, finishing their first league season in 11th place.

In 1891, the Magpies missed out on their first big chance to win a major trophy by losing 1-3 to Blackburn in the FA Cup finals. They made up for it three years later, with Jimmy Logan scoring a hat-trick in a 4-1 victory over Bolton Wanderers. This remains the only major trophy in the club’s history, as well as the first time that a team outside the top division won the FA Cup.

After many years of playing at different home grounds, Notts County moved to Meadow Lane in 1910 for a long-lasting stay. Still, this didn’t stop the team from yo-yo-ing between the top two divisions of English football. In 1930, they were relegated to the Third Division for the first time, though they managed to bounce back the very next season.

In 1941, Meadow Lane was hit by enemy bombing, and the stadium was subsequently closed. To this day, this remains the only season where Notts County played no football whatsoever. Following the end of WWII, Notts County returned to the public eye by paying a then-record fee of £20,000 for Chelsea’s Tommy Lawton. This resulted in bolstered attendance at Meadow Lane, which helped the club return to the Second Division in 1950.

By the end of the ‘50s, however, Notts County lost the race for the city’s biggest club to Nottingham Forest. They were back in the Third Division by 1957, and were soon relegated to the Fourth Division for the first time in 1959. The club continued to struggle during the ‘60s, with most of their efforts aimed at avoiding the embarrassment of having to apply for re-election,

Things finally changed for the better with the appointment of Jimmy Sirrel as manager in 1969. During Sirrel’s time at the club, Notts County made huge strides, earning promotions to higher echelons of English football on a regular basis. This culminated in a historic victory over Chelsea and a return to the First Division in 1981. They remained in the top flight for the next three seasons, recording many notable results along the way.

In the years that followed, the Magpies continued to achieve solid results. They returned to the First Division for the final time in 1991, though they were immediately relegated again. This was the beginning of another long freefall, which came to a head when the club was relegated to the fifth tier of English football in 2019.

Notts County FC is probably more famous for its heritage than its merits. It is generally considered as the oldest English club and thus the oldest in the World. Sheffield Wednesday is, however, sometimes mentioned as the oldest club. Which of the both that is the oldest depends if the foundation for the Sheffield club is set to 1857 or 1867. About that the opinions divide, but the latter is the most recognized version.

In the center of the crest there are two magpies with their feet on a football. Magpies have been visible on several versions of the logo, but in some earlier version only one. The bottom part is filled by black and white vertical stripes, just like on the team's shirt.