Despite its relatively short lifespan, FC Salzburg has had a colorful history. Most notably, the club’s name was changed on four occasions, partly as a result of two different sponsorships. They’ve recently become one of the most successful teams in Austrian football, having won more than ten Austrian Bundesliga titles and several Austrian Cup trophies. The club is currently known as FC Red Bull Salzburg. 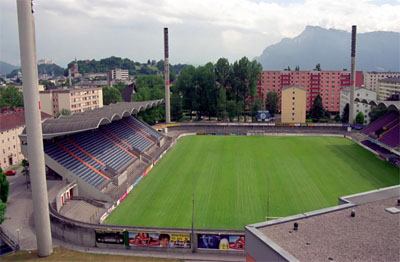 The Lehener Stadium, former home ground for the Salzburg team.

In 1933, the merger of two of the biggest Salzburg clubs -- FC Rapid and FC Hertha -- led to the foundation of SV Austria Salzburg. The new club took a while to find its bearings, and was later dissolved and re-founded in 1950. They first gained promotion to the Austrian Bundesliga in 1953, finishing the season five points above the relegation zone.

For most of the following two decades, Salzburg continued to pop in and out of the top flight. Their most successful period came about in the early ‘70s, when they finished as runners-up in the 1971 edition of the Bundesliga. This led to their first appearance at the international stage, where they were eliminated in the first round of the UEFA Cup by UTA. In 1974, they made it to the Austrian Cup finals, losing to Austria Wien 2-3 on aggregate.

In 1978, the club changed its name to SV Casino Salzburg. However, the new moniker didn’t seem to bring them good fortune until the early ‘90s, when they finally started competing for silverware. They claimed their first Bundesliga title in 1994, following it up with two more titles in 1995 and 1997. That same year, a sponsorship deal led to a name change to SV Wüstenrot Salzburg.

This period also saw Salzburg build its reputation internationally, as they reached the final of the UEFA Cup in 1994. Still, they were no match for Internazionale, who won both games with a scoreline of 1-0. Next season, Salzburg qualified for the group stage of the Champions League by defeating Maccabi Haifa 5-2. They eventually finished third in a strong group containing defending champions Milan, eventual winners Ajax, and AEK Athens.

In March 2003, the first match was played on the new Stadion Wals-Siezenheim. The initial capacity was a bit over 18,000, but the stadium was expanded to over seats 30,000 in time for the Euro 2008. The arena had by that time also changed its name to Red Bull Arena. It is the second biggest football arena in Austria, only Ernst-Happel Stadium is bigger. 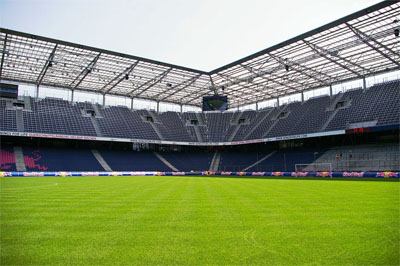 By 2005, it seemed like Salzburg was doomed to return to the margins of Austrian football. However, a takeover by the Red Bull company led to a complete rebrand of the club, including their team colors, logo, players, and the entire staff. In fact, Red Bull initially insisted on the fact that this was to be a new club with no prior history. As of right now, the Austrian Football Federation still considers the club to be a legal successor of Austria Salzburg (the same year, SV Austria Salzburg was reformed by supporters of the old SV Austria and since that resides in lower divisions).

Under the new name and regime, Salzburg emerged as the dominant club in Austria. The support provided by Red Bull proved to be a huge boon to the club, who finally had the financial means to hire big-name coaches and players. As a result, they’ve claimed 10 out of possible 14 Bundesliga titles in the Red Bull era, along with 6 Cup titles. In 2018, they reached the semi-finals of the Europa League, losing to Olympique de Marseille in extra time.

The original crest of the club displayed an oval with a town silhouette together with the letters “Austria SV”. When the club was renamed as SV Casino, the logo changed and a football player was placed in the center. Modified versions of this logo would remain until the Red Bull rebranding.

1933 The club is established as SV Austria Salzburg.
1978 The club is renamed as SV Casino Salzburg.
1994 First time national league champions.
1994 First time winner of Austrian Supercup.
1997 The club is renamed as SV Wüstenrot Salzburg due to sponsorship reasons.
2003 The club move to the Wals-Siezenheim stadium (later known as the Red Bull Arena).
2005 The club is rebranded to FC Red Bull Salzburg after a takeover by the Red Bull company.
2007 Winning the top division after collecting 75 points, a new club record.
2012 First Austrian Cup title.
2018 Winning the top division without losing a single match at home ground.