ACF Fiorentina (ACF stands for Associazione Calcistica Fiorentina, or Fiorentina Football Association in English) has over the years established itself as one of the most well-known Italian football teams even that it belongs to only a midsize city, Florence. In the beginning of 2000s Fiorentina faced an economical crises and after bankruptcy ceased to exist. Since when the club have been founded again. 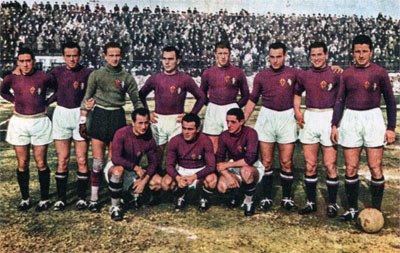 The team in the 40s with purple shirts.

The history of football in Florence goes back longer than the birth of AFC Fiorentina. In 1898, Florence Football Club was founded. That club was dissolved some years later, instead two older sport clubs, Club Sportivo Firenze and Palestra Ginnastica Fiorentina Libertas, started football sections in the 1910s. CF Fiorentina was founded in 1926, by a merger of this two Florentine clubs – CS Firenze and PG Libertas.

Even with the hype around a new and spacious stadium being built in 1931, much of the club's next 25 years were spent in the lower divisions of Italian football. The only bright spot was winning Coppa Italia in 1940.

The 50s were a lot more successful for Fiorentina. After some consistent top-table finishes in Serie A, the club won its first Scudetto in 1956 with a 12-point difference over the second-place team. The team came close to a perhaps even bigger trophy when reaching the European Cup final the subsequent season. After beating Grasshopper and Red Star, they had to face Real Madrid at the Santiago Bernabéu Stadium in the final and was defeated 2-0.

On Italian ground, they also came out triumphant in 1961, winning both its second Coppa Italia trophy and the first Cup Winners' Cup ever held, defeating Glasgow Rangers in the final. 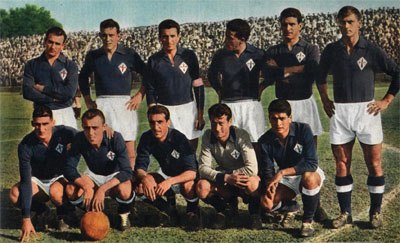 The team that would win the club's first Scudetto.

The next decade also proved productive for the club. After winning another Coppa Italia title in 1966, Fiorentina won its second Scudetto in 1969 by prevailing over the favored Milan and Cagliari. The club followed it up with a streak of mediocre showings in the 70s, but still managed to win another Coppa Italia in 1975.

After Flavio Pontello took over as president in 1980 and started bringing in some marquee signings such as Roberto Baggio, Fiorentina once again found itself at the top. Still, even though they played exciting football and achieved some high-table finishes, the club did not manage to win any trophies during this period.

The 90s were much of the same for "La Viola." Even after acquiring some high-quality players like Gabriel Batistuta, the club only won a single Coppa Italia trophy in 1996.

The turn of the century brought some shocking news for the fans; the club turned out to be deeply in debt. The drama was culmination in July 2001 when the police did a raid against the house of the owner Vittorio Cecchi Gori due to a money laundering investigation. It was discovered that the club’s financial state was miserable and AC Fiorentina had to declare bankruptcy in 2002.

All was not lost, however. After the club's bankruptcy, another one was created in its stead – Fiorentina Viola. The new club was forced to start competing from Serie C2, but still managed to return to the top flight on record-time. First after skipping C1 by stepping directly from Serie C2 to Serie B, which was possibly due to an expansion of Serie B from 20 to 24 teams. After beating Perugia in the playoff, Fiorentina was back in Serie A for the 2004-05 season.

Along the way, they re-bought the name rights and went back to being named ACF Fiorentina.

The upper part of the kite-shaped crest is dominated by a red fleur-de-lis (a flower of lily) and the lower part has the “AFC” initial written out in lilac background color.

1926 The club is established.
1929 The team change to a purple kit.
1931 First season in Serie A.
1940 Winning their first Coppa Italia trophy.
1956 First scudetto.
1961 Winning the UEFA Cup Winners' Cup.
1991 Gabriel Batistuta is signed to the club.
2002 The club is declared bankruptcy.
2002 The club is re-established, officially as Fiorentina Viola.
2003 The right to the name ACF Fiorentina is bought back.