During its 72-year-long existence, Czechoslovakia took part in eight World Cups and three European Championships. They were reasonably successful, finishing second at World Cups 1934 and 1962 and winning the Euro 1980. The team was disbanded following the dissolution of its native country, with the Czech Republic carrying on as the official successor. 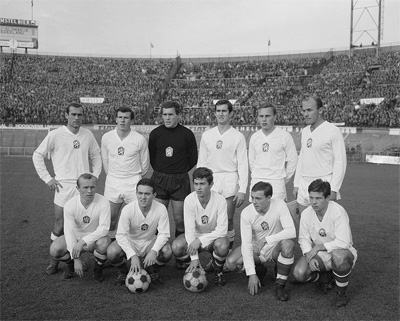 Czechoslovakian team before at match in november 1966.

Shortly after the establishment of independent Czechoslovakia, the country’s national team started preparing for the 1920 Olympics. That’s where they recorded their first official victory (7-0 against Yugoslavia) and made a successful run to the finals. However, the final match against Belgium was mired in controversy; with 0-2 down, the Czechoslovaks left the field and were not given medals.

This incident was soon forgotten in light of an excellent showing at the 1934 World Cup. The team recorded three straight victories on their way to the final match against hosts Italy: 2-1 against Romania, 3-2 against Switzerland, and 3-1 against Germany. They proceeded to lose to Italy 1-2 in extra time, despite gaining the lead in the 71st minute. With 5 goals, Oldřich Nejedlý won the top goalscorer title.

The 1938 World Cup was also relatively successful for Czechoslovakia. After beating the Netherlands in the round of 16, they were set to play Brazil. Following a 1-1 draw in a violent skirmish known as the Battle of Bordeaux, the Czechoslovaks lost the replay 1-2 and were eliminated. During WWII, they played a few unofficial matches under the name of Bohemia.

The post-WWII period started off quietly, as Czechoslovakia missed out on the 1950 World Cup. At the following two World Cups, they were eliminated in the group stage. However, they made up for it by qualifying for the inaugural European Championship in 1960. At the final tournament -- which consisted of four teams -- Czechoslovakia lost to the Soviet Union 0-3 in the semi-finals, but then defeated France 2-0 in the 3rd-place match.

This proved to be a solid prelude to the 1962 World Cup. Led by the talented midfielder Josef Masopust, Czechoslovakia survived a group containing Spain, holders Brazil, and Mexico. They went on to beat Hungary and Yugoslavia, staging a rematch with Brazil. Despite opening the scoring via Masopust, they lost the match 1-3. Masopust’s stellar performances were later rewarded with a Ballon d’Or trophy.

The following period saw Czechoslovakia struggle to rediscover the winning formula. By the time of their dissolution, they qualified for only three out of seven World Cups: in 1970, 1982, and 1990. In the former two tournaments, they went out in the group stage. The 1990 World Cup was somewhat of a swan song; they advanced from their group and defeated Costa Rica 4-1 in the round of 16, only to lose to Germany in a tight 0-1 game later on.

In between these tournaments, Czechoslovakia managed to claim its first and only major trophy at the 1976 European Championship. After topping their qualifying group and getting revenge on the Soviet Union in the play-offs, they advanced to the final tournament. Once there, they defeated the Netherlands 3-1 in extra time and took Germany to penalties in the final. They then won the match via Antonín Panenka’s memorable chip shot.

Czechoslovakia have participated three times in the European Championship (Euro).

The logo mirrors the colors and triangular pattern of the Czechoslovakian flag. In the middle, an old-fashioned football is seen and the black outer border integrate the text: "Ceskoslovensky fotbalovy svaz" (in English: Football Association of the Czech Republic).