Home › The name of football in various languages

The name of football in various languages

Football is an English name and when the game was originally imported by other nations, they often kept the name. But later on, a congenial name was adopted that fitted. For instance, when the first football league was founded in Argentina in 1893 it was called Argentine Association Football League and the association was called Argentine Football Association. In 1912, AFA Hispanicized the name to Asociación del Fútbol Argentina. In South America, football would after some years also be called fútbol criollo (creole football).

Most well-known is the distinction football and soccer, in which Soccer is used in United States, Canada, Australia, New Zeeland and some other countries. Another relative known name outside its own country is calcio used in Italy. In many cases, the local names is close related with the English original name such futebol used in Brazil and fútbol in Spain. And in France, football, without any dissimilarity in spelling is used. 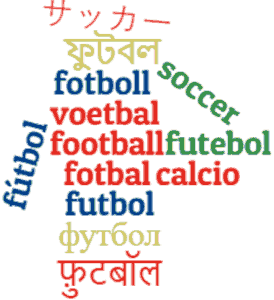 Several original English terms is kept in the terminology used by many countries. In South America, offside, for example is still used.

› The development of football rules
› The football field and its dimensions