Home › The football field and its dimensions

The football field and its dimensions

The size of a football (soccer) field is about 100 metres long and 60 metres wide, but in official games there are regulations about the minimum and maximum dimension. In the world football the most official dimensions are those that had been decied by FIFA (The Fédération Internationale de Football Association). 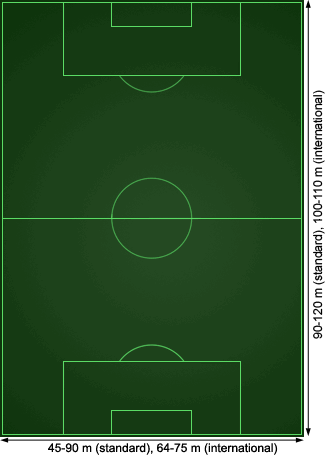 According to the stipulations from FIFA a football field should have specific minimum and maximum dimensions:

For international matches the rules are somewhat stricter:

In 1800s, the fields could be up to 100 yards wide and 200 yards long. The boundaries were only marked by flags until 1882 when boundary lines, as well as a halfway line (the center circle became a standard five years later), on the turf were enforced.

The goal area is the small box inside the penalty area. The FIFA rules stipulates that the distance from each goalpost to the lines that goes parallel with the touch line should be 5.5 metres. When the size of a standard goal is added it makes the distance between the lines 18.32 metres. 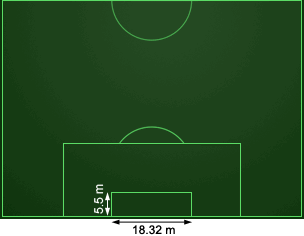 The penalty area is the bigger box close to the goal that integrates the goal area and the penalty mark (it was introduced in 1887 and was complemented by D-shaped curve in 1937). The lines that extend into the fields are 16.5 metres and they have a 40.32 metres distance from each other.

The penalty mark is 11 metres from the goal line and centered on the fields' goal line. 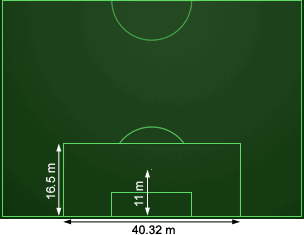 A very common field dimension among the top clubs in the world is 105 × 68 metres (114.8 × 74.4 yds), since this is a recommendation from UEFA. Some famous stadiums and the dimension of their football fields:

According to the guidelines of UEFA, it should be an additional 1-3 metres beyond the touchline to the advertising boards.

The typical length of the grass on a pitch is 25-30 millimeters. The grass is often cut from side to side, in every other length, which brings visible stripes on the grass. This is made to help the assistant referees to spot offsides easier by giving vertical references.

Depending of the climate, different turfgrass is needed. In cooler regions grass species like ryegrass, meadow-grass and tall faescue is used. In warmer regions, species such as bermudagrass, zoysia species and seashore paspalum is used.

Among the UEFA guidelines is considerations for drainage. To avoid that pitch is filled with water in heavy rain, it should be a sand-dominated root zone below the pitch turf. Underlaying this sand-dominated zone is a pipe-drained sub-base.

Until 1882, the goalposts would lack a crossbar and goals could be approved when the ball was kicked between the post several metres up in the air. A period before the crossbar were introduced, a ribbon about 2.5 meters above the ground were used as marking the height. The net would be introduced ten years later in England. In the beginning of the 1900s, round and oval goal posts were introduced instead of the previous square variants.

References:
https://www.uefa.com/MultimediaFiles/Download/uefaorg/Stadium&Security/02/54/11/97/2541197_DOWNLOAD.pdf
The Ball is Round: A Global History of Football – David Goldblatt (2008)