The Italian soccer club Bolgna FC was established in 1909 and was one of the founding members of Serie A. They have won Serie A on occasions, the first time in the season 1924-1925. They have also won the Coppa Italia twice, the Mitropa Cup trice and the UEFA Intertoto Cup once. 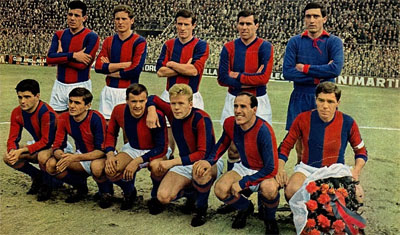 An important person in the foundation of the club was the Austrian Emilio Arnstein. Inspired by the British football that dominated the game under this period, the club was used the letters FC (Football Club) in the name in addition to the name of the city. The club is also referred to as Bologna FC 1909 including the year of its inception.

Bologna FC was among the 18 founding members when Serie A was initiated in 1929. Before that, they played in Divisione Nazionale, at this period the top level of the Italian club football. The Divisione Nazionale winner were decided by two-legged finals. Bologna won their first title in 1925 after beating Alba Roma in the final.