Birmingham City is the little brother to Aston Villa in comparison with success on the football field. They had never won a title in the highest league or the FA Cup (the reach the FA Cup final twice, in 1931 and 1956). They have played several seasons in the top league, but more often in the lower divisions. On spare occasions has the team been present in European competitions. Some of the profiles over the years are Trevor Francis, Kenny Burns and Bob Latchford. 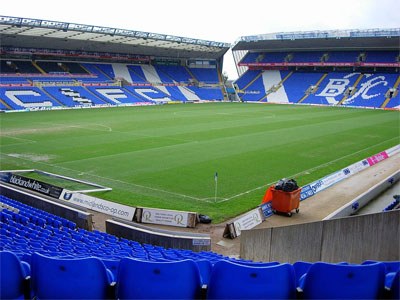 The club was founded in already in 1875 (one year after Aston Villa) as Small Heath Alliance by members of the Holy Trinity Church favoring cricket mong sports as mny was at this time in England.

The club would 30 years later be renamed as Birmingham (“City” would be added to the name additionally 30 years later). Birmingham City were the first football club to establish an option company.

Small Heath started their football league experience in the new founded The Combination, which included teams in the Midland and the North. The Combination was cancelled after that season and the Birmingham club would participate in the new founded Football Alliance the following season. Small Heath didn’t get an impressive start in neither of these leagues. In the first season in the Football Alliance they finished third from the bottom and was only second greatest in their city, Birmingham St George's FC was performing better. But things would change. In the 1891-92 season, Small Heath finished third in the Football Alliance and got elected to the Football League Second Division whereas Birmingham St George's FC was dissolved.