Thanks to its rise to power at the turn of the century, FC Basel 1893 is now considered to be one of the best Swiss clubs of all time. During their long history, they’ve claimed 20 Swiss Championships, 12 Swiss Cups, and the inaugural Swiss League Cup. Due to Basel’s signature red-and-blue kits, their fans often refer to the club as RotBlau (RedBlue in English). 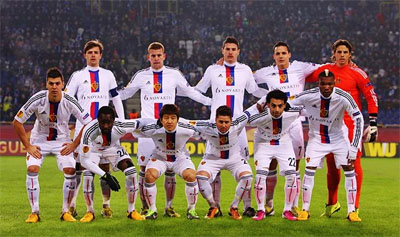 In 1893, businessman Roland Geldner placed an advertisement in a national newspaper called Basler. The ad called for a forming of a football team, setting up a meeting for all interested parties the following Wednesday. Ten men -- mostly from the academic community -- answered the call, and Fussball Club Basel was formed on 15 November 1893. From the very beginning, the club’s official colors were red and blue.

Early on, Basel struggled to stay competitive in the newlyformed Swiss Serie A. They won their first trophy in 1933, beating arch-rivals Grasshopper 4-3 in a climactic Swiss Cup final. They went on to repeat this success in 1947 and 1963. In between these two triumphs, they claimed their first Swiss Championship in 1953. Their main trump card that season was club legend René Bader, who assumed the role of player-manager.

The late ‘60s saw Basel reinvent the club philosophy under the guidance of Helmut Benthaus. In the 17 seasons Benthaus spent managing the team -- the first six of which he was a player-manager -- Basel won seven Swiss Championships and two Swiss Cups. In addition to Benthaus, this squad included other talented players such as Marcel Kunz, Walter Mundschin, and Ottmar Hitzfeld.

During this period, the club found some success at the international level as well. In 1974, they made it to the quarter-finals of the European Cup, where they lost 5-6 to Celtic on aggregate. This is still a sore spot for the club’s fans, as Basel was arguably the better team, especially in the first leg. As it would turn out, this was the club’s last significant European appearance until the arrival of the new century.

The team had played their matches at St. Jakob-Stadium for decades. The stadium was constructed in time for the 1954 World Cup in Switzerland. In the 1990s the stadium was outdated and demolished in 1998. 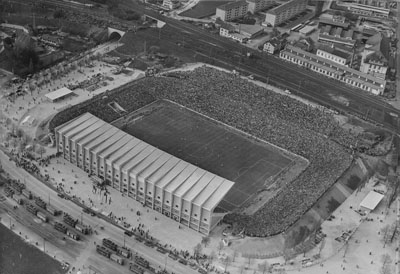 Large audience at St. Jakob-Stadium in 1954.

With the opening of the St. Jakob-Park in 2001, Basel returned to the top of Swiss football. They went on to win the double in 2002, followed by six more trophies by the end of the decade. The ‘10s saw Basel become the dominant force domestically, winning eight straight championships from 2010 to 2017, along with three cups. Soon enough, their main rivals Grasshopper and Zürich became unable to compete with Basel’s expanding presence. 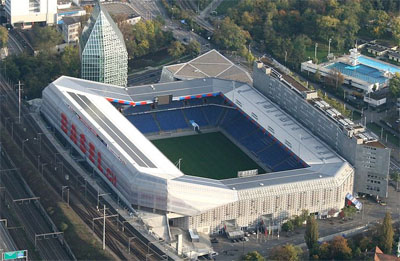 Internationally, Basel started making waves in the revamped Champions League. They reached the round of 16 on three separate occasions, but were unable to advance past Bayern, Porto, and Manchester City, respectively. They found more success at the Europa League, where they made the semi-finals phase in 2013. This time around, they lost a closely contested match against eventual champions Chelsea.

The crest resemblance the shirts with half sides in red and blue colors respectively. Inside the crest, the stylized letters "FCB" is displayed, which stands for Football Club Basel, or, in the original language, Fussballclub Basel.